You must be logged in to add a private note. Login | Register

We are adding the recipe to your Recipe Box.

This was added to your Recipe Box.

You must be logged in to add a recipe. Login | Register 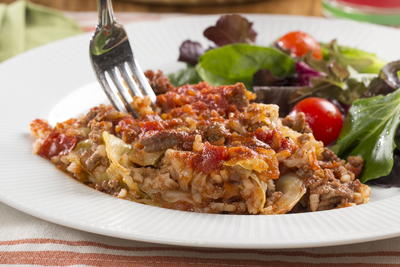 Have you ever heard of an unstuffed cabbage casserole? What about a stuffed cabbage casserole? Well, we decided to get a little creative and combine the two making a recipe for "Unstuffed" Stuffed Cabbage Casserole. It's packed with those cabbage flavors you love, but it's also made with a fuss-free weeknight dinner in mind. We know things can get hectic, but you shouldn't have to sacrifice your favorite flavors because of time constraints. Now, with our "Unstuffed" Stuffed Cabbage Casserole, you don't have to.

Cabbage and it's Colorful History

Cabbage is a versatile veggie that we can do so much with. Not only is it a colorful food, coming in greens, reds, and whites, but it also has a colorful history. In fact, it can be traced as far back as the ancient Greeks, and then to 14th-century England, when the first round-headed version of cabbage appeared. Curious about when it came to America? Well, that's rumored to have happened between 1541-1542 when the French explorer Jacques Cartier brought them over on his third voyage.

If you love these recipes, then you'll love this FREE eCookbook!

Prepping for a potluck? Download our free ecookbook today.

Do You Remember the First Time You Tried Cabbage?

I made this for dinner tonight we both loved it will be making it again. Just may have to have some for lunch tomorrow.

Can I make this in a crockpot if so how long do I cook it?

Hello! Yes, this recipe can be cooked in slowcooker on low heat for 7 to 8 hours or on high heat for 3 1/2 hours to 4 1/2 hours or until cabbage is tender. Hope this helps!

I have been making this since the 70's. I never boiled the cabbage before baking. I just mix all (meat has to be cooked a little bit)and then put in oven as directed. No need to parboil cabbage. Love this. So easy to make and so tasty !

Can I use ground turkey meat instead of ground beef?

Hi there! You can definitely used ground turkey as a substitute. Enjoy!

It just wasn't very good at all.

I HAVE MADE UNSTUFFED CABBAGE BEFORE AND INSTEAD OF TOMATO SAUCE AND PASTE I USED TOMATO SOUP MUCH MORE TASTY.

It is hard to find recipes that our entire family will enjoy that are also low sugar and low carb for our diabetic family member. I do not use rice, nor the brown sugar. I use a can of tomato soup instead of tomato paste. It is wonderfully filling and our entire family loves it. I do not bake it, but I do let it simmer for about half an hour before serving. I also use about 1 tsp of greek seasoning and it works beautifully for this recipe. It is filling, and really comes close to being a comfort food, at least for our family..and best of all, EVERYONE loves it. Never any leftovers with this meal!

Why do I have to put this in the oven, when everything is already cooked?

Hi there! We like to put this recipe in the oven in order for the flavors to marry. You can also do this on the stove on LOW for 25-30 minutes. Enjoy!

Been making this for years, instead of rolls I call it Polish Lasagna. I use my own stuffed cabbage recipe and just layer it in a deep casserole or loaf pan. Tastes the same and a LOT less work.

This great but I didn't add any sugar or tomato paste. I used a sweet onion and Hunts diced tomatoes with sweet onions. My husband love it and so did I.

Also left out the rice and lemon juice which made it have no carbs. Share this with my friends and family as well.

Look for the Tomato Paste in a re-closable TUBE...I love it!!

My husband is German from Russia. So I often make traditional cabbage rolls. We loved this recipe and will definitely make it again. I didn't boil the cabbage but rather just put it in with the ground beef and onions and simmered it for a few minutes.

It is much easier and quicker to make stuffed cabbage. This was awful in taste (followed the directions precisely), appearance, and time. Cabbage was undercooked on top and needs much more seasoning. Will definitely not make again.

I love this stuff, I call it "Lazy Halupki".

Are you sure you would like to report this comment? It will be flagged for our moderators to take action.

Thank you for taking the time to improve the content on our site. 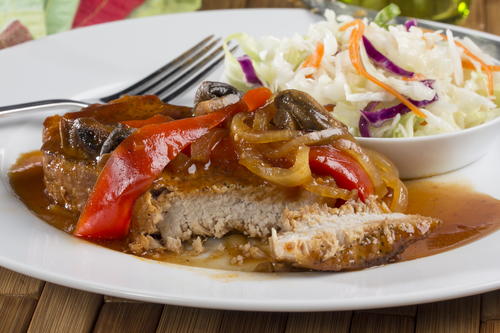 Press to bookmark this page.
Close